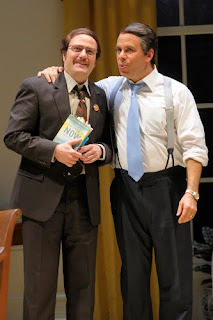 When I learned I was going to play "A Representative of the National Association of Turkey and Turkey By-Products Manufacturers," I was a bit baffled at first. Who is this mysterious, bespectacled, mustachioed man with a few anger management issues? In David Mamet's play November, this hapless fellow has earned the great privilege of introducing the president of the United States to the two turkeys that ceremonially get pardoned every Thanksgiving. I imagined this was one of the highest honors that a "Turkey Guy" could get, and he's been preparing for this moment for months, if not years, and can't wait to shake hands and get a picture with the POTUS himself. Unfortunately for our intrepid hero, he can't even get his first words out before he is cut off, and things go rapidly downhill for him throughout the rest of the evening.

So how to find this character? I looked in the dictionary under "hapless" expecting to find a picture of myself staring back at me, but no luck. So I went right to this guy's passion, his livelihood, indeed his very raison d'être: TURKEYS. I got lost in the fascinating and sometimes terrifying world that is the turkey industry in this country largely through their advocacy organization, The National Turkey Federation. This is where I discovered their, I mean my, motto: "Turkey: The Perfect Protein." That's where our costume designer, Alex Jaeger found the pièce de résistance of my costume, a pin featuring a gold turkey in relief, flying, claws extended over a waving star-spangled banner. I read up on the myths that continue to spread the malicious belief that turkeys are dumber than rocks—that turkeys will stare up in a thunderstorm, mouths open, until they drown. Or that you have to put colored pebbles in their drinking water so they think it is food and peck at it, otherwise they will die of dehydration. Hmm . . . my Representative was not the sharpest guy either, a bit slow on the uptake. OK, good to know.

I learned that Minnesota has one of the highest number of turkey farms in the country, so suddenly my Turkey Guy was from Minnesota. Somehow I had decided he was named Herb, and since he was now from Minnesota, he might have Scandinavian heritage, so I named him Herbert Blomstedt, which may ring a bell to longtime SF Symphony fans. Finally I watched a lot of YouTube videos of actual turkeys and their physical behaviors. I tried to incorporate how they turn their head sideways to look at something, since they can't use both eyes to focus on anything. Of course I watched their "gobbler" and finally put to good use the double chin I've been self-conscious of for years. Various bits of head bobbing and weaving slowly started to creep into Herb's physicality. Most of all, I kept in mind that my character was always one step away from disaster, from being shipped off to a military prison in Bulgaria, or from the president potentially wrecking the turkey industry's annual Thanksgiving Day windfall. I found the perfect metaphor for this in a video of Sarah Palin after pardoning a turkey, giving an interview while one of the turkey's less fortunate brethren is unceremoniously thrust into a grinder in the background. Herb's mantra became: Avoid the grinder. Avoid the grinder. Avoid the grinder.

Needless to say I will sit down to Thanksgiving Day dinner this year with a whole new perspective. Gobble gobble!