Please join me in welcoming the Master of Fine Arts Program class of 2012. In this third of three posts about what our students did this past summer, we offer you a first glimpse into the lives of the actors who will be spending the next three years with us.

Matt Bradley spent a month in Atlanta, Georgia, on his knees in The Last Days of Judas Iscariot and doing his best Adam Sandler in The Wedding Singer (the musical). He watched a lot of theater, read many books, spent a week in Sun Valley, Idaho, and, finally, moved into a little studio apartment on Pine and Hyde. 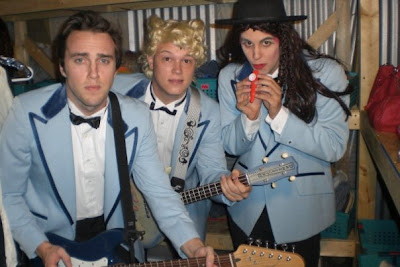 Alex Crowther: “My summer was busy getting ready for the big move to San Francisco. It was a mix of good (the excitement of meeting my new classmates and learning more about what the next three years have in store), bad (the never-ending visa applications, government assistance applications, and health care coverage applications), and sad (saying goodbye to family and friends). I had the chance to play A Midsummer Night’s Dream’s Demetrius in Brampton, Ontario, with a fun and friendly cast. The big highlight though: seeing a rehearsal of Phèdre [directed by A.C.T. Artistic Director Carey Perloff] at the Stratford Shakespeare Festival, a chance to watch my favorite Canadian actors in the process of creating their roles. I can’t wait for them to arrive in the new year!”

Christina Elmore: “This summer was simple and mostly relaxing. After graduating from college in June, I drove from Boston to California on a six-day road trip. I then headed back that way and had the pleasure of spending two months in Chicago living with my sister and working high-end retail with my cousins. In between folding and the cash wrap, I saw some great shows, enjoyed the beach, read plays, and reconnected with friends. Once back at home in Sacramento, I did a workshop at a local theater, hunted for an apartment in the city, and helped my family move and am now gearing up for the next three years.”

Ben Kahre: “This summer I moved to San Francisco from Evansville, IN, and prepared my apartment as well as myself for the upcoming year. While here in the city, I had the opportunity to volunteer as an audition reader for Magic Theatre during a couple of their Equity auditions. I met most of the artistic and management staff of the Magic, as well as many of the working Bay Area actors. It was a fantastic experience, and I look forward to being on the opposite side of the table next summer.”

Jessica Kitchens spent the first part of the summer taking over the role of Mary for an extended run of Theresa Rebeck’s Mauritius at Magic Theatre. She then spent July relaxing, working, and saving up money for a trip to Turkey to visit friends who live there. Most of her time there was spent in Istanbul, but she also traveled south to visit Olympos, a beach town on the Mediterranean Sea, where she mostly read plays and soaked up the sun. Upon her return to the States, she flew to Nashville to hang out with her family—the perfect end to the summer.

Maggie Rastetter spent the first half of the summer on a cross-country road trip, hiking through national parks and cavorting through deserts. Highlights included herding cattle with a four-wheeler, running across a moose, coming down with food poisoning in the middle of a Yosemite snowstorm, and nearly getting stranded in Death Valley. She moved to San Francisco in mid July and is steadily adjusting to big city life with the rest of the M.F.A. 8.

Courtney Thomas: “Let’s see . . . How I spent my summer vacation? The morning after graduating from Howard University in Washington, D.C., I packed up all my stuff and flew home to the Bay Area. Sleeping in and reading plays was going magnificently until I received a call from The Studio Theatre in Washington, D.C., offering me my first understudy role: as Canary Mary in Fucking A, by Suzan-Lori Parks. AWESOME! That was a Thursday—I was on the phone Friday making living arrangements, and in the airport Saturday, Sunday, and Monday trying to make it to the first rehearsal on Tuesday. I live for that kind of excitement! I lived in the basement apartment of my former Howard University professor and babysat her absolutely adorable kids, Tashi (four) and Juney (two), all summer. I’ve been back home for about two weeks now, and I’m still looking for the perfect apartment in Nob Hill, getting to know my amazing classmates (love at first sight!), and trying so hard to brace myself for what’s to come in the next three years and on. Ready or not—here I come!”
ACTMFAProgram AlexCrowther BenKahre ChristinaLorennElmore CourtneyThomas DanRubin JessicaKitchens MaggieRastetter MattBradley