One of the challenges for artists working within institutions (no, not those kinds of “institutions”) is to be creative, imaginative, and even occasionally inspired . . . on a schedule. We here at A.C.T. are continually churning out work, from the mainstage to the classroom, and it all has to happen on time and on budget. Sometimes we capture lightning in a bottle; sometimes we get singed. Usually our plays are ripe for an audience at just the right moment, but sometimes we have an opening night because, well, that’s what it says on the calendar.

So how do we ensure that we’re always working at our best? How do we foster an atmosphere of continual creativity and invention, so that when those opening nights arrive we will be ready for them? Trying to find new answers to those old questions has been the focus of a lot of our energy lately, and has involved efforts ranging from informal hallway conversations to company-wide meetings, surveys, interviews, and focus groups. And it all got kicked off this year in a fantastically inspiring way:

This year we began the 2009–10 academic year with an experiment: students from all three years of the Master of Fine Arts Program gathered with faculty, core acting company artists, Conservatory Director Melissa Smith, and Artistic Director Carey Perloff in a two-day exercise in creativity and collaboration. We warmed up together, taught and learned from each other, and made theater with each other all over the building at our administrative offices and rehearsal spaces at 30 Grant Avenue. On the first day, three groups of students and two of faculty/staff were given three hours to create short pieces of theater based on poems drawn out of a hat. It was a matter of “Here’s your poem. Go!”

We DEVOURED those poems, deciphering the ambiguities, pondering the depths of the imagery, wrestling with the same questions we always do—How should it sound? How should it look? What’s the author really trying to say and how can we best serve that? How do we decide what works and what doesn’t? How do we respect everyone’s experience yet attain a unified whole?—trying idea after idea until a form began to take shape. “My” group finally settled on an abstraction of the poem’s main ideas, using choreography, choral speaking, even water swishing around in a wastebasket just for the sound of it. I haven’t been as nervous or excited about a performance in years! Other groups performed in almost total darkness, made wild music with their bodies and voices, created hilarious skits worthy of Saturday Night Live—it was an evening of total raucous inspiration and mutual admiration that left us all exhausted and exhilarated.

The next day the process repeated but with mixed student/faculty groups—not part of the original plan, but the best idea of all—creating pieces based on a short story by Jorge Luis Borges, and that’s when things really got interesting. The story seemed to demand the impossible: set in a foreign country and taking place over decades, the characters all male, with elements including comets, trains, the countryside, and a deadly knife fight. But no time to worry about that! Students, company members, and faculty worked together as equals, each group being responsible for one fifth of the whole story, with the students’ inspirational abandon and great sense of play enlivening and being given enhanced expression by the older artists’ concepts of form and clarity. To be honest, in my group the “teachers” learned a few lessons in collaboration from our “students.” I was perhaps proudest of the fact that in my group each member’s most personal response to the text got included in the final result . . . even though at first they might have seemed not to mesh at all. As one student observed, “I couldn’t have thought that up, but we did.” Although it wasn’t part of the original plan either, the pieces when presented took place all over the building, in the Hastings Studio, in classrooms, in a hallway, and even out on a balcony. We dashed from place to place, eager to see how each group would handle the story we already knew. The interpretations were really varied and inventive, using all the elements of stagecraft available to us—sound/silence, motion/stillness, voice/body, words/music—in ways that often made us literally gasp with delight. It reminded me all over again of the reason we do classical theater in the first place: it is thrilling to see something you think you already know, reimagined for this very moment by creative artists. And it proved once and for all that it IS possible to create on a deadline, under pressure, if everyone is willing to set aside their usual “roles” and work in a spirit of mutual loving commitment to the art of theater.

Now as we move forward into the rest of the school year and the mainstage season, I hope we can find a way to keep the spirit of “The Leap” alive, every working day. 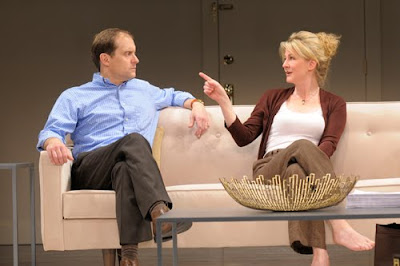