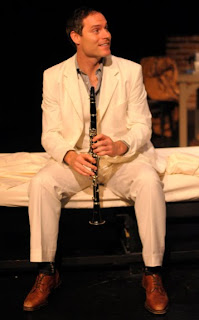 There are so many positive changes taking place right now at A.C.T. I thought I’d blog about one improvement, which is the newly zoned performance space for the Conservatory. For years, A.C.T. M.F.A. Program students have staged wonderful productions in Hastings Studio Theater, but due to zoning regulations these shows were by invitation only and not open to the public.

This year we are excited that Hastings has been designated as a public performance space. It allows the public to come see the wonderful work going on in the Conservatory, and enhances student training by extending our run to allow more shows. Two plays are opening there this week featuring the 12 student actors in the M.F.A. class of 2011, and we hope you’ll come!

I am part of the Vieux Carré cast and have had a good time exploring the world of 1938 New Orleans. The story revolves around a young writer struggling with his homosexuality and literary ambitions. Set in the decaying glamour of a boarding house in the French Quarter, it is a memory play teeming with longing, loneliness, sensuality, smoke, and jazz in the last part of the Great Depression.

I play a drifter jazz musician who enters the writer’s life and invites him to escape to the freedom of the open road. It is a role that plays in contrast to the other characters, who are trapped in the
confinement and dissolution of the boarding house. Researching the role, I listened to a lot of New Orleans jazz, cooked gumbo, and took another look at the definitive American road trip novel (set ten years after Vieux Carré), Jack Kerouac’s On the Road.

Williams fills the play with the Southern eccentricities, evocative atmosphere, and sense of lyrical passion we have come to love in his best work, and it has been a sultry place to spend the last few weeks of rehearsal. I think Vieux Carré is something of a lost treasure—brimming with heart and heartbreak, and moments of hilarity in this bizarre Bohemia.

After you’ve had a taste of New Orleans, I hope you will also join us to head to the world of the Southwest in Sam Shepard’s Fool for Love.