The U.S. premiere of the Kneehigh Theatre production of Noël Coward’s Brief Encounter at the American Conservatory Theater (formerly the Geary) marks a notable return by Coward not just to San Francisco, but to the same street where his work has been most frequently seen in this city and which The Master himself frequented in his lifetime.

In researching the Museum of Performance & Design’s recent exhibition Star Quality: The World of Noël Coward, I was delighted to discover that San Francisco was a very significant town for Coward, both personally and professionally. He first visited in 1926, staying at the Fairmont Hotel, and even though literally on the verge of a nervous breakdown, he fell in love with the city. He thought it was one of the very few great theater towns in America and returned many times on his visits to California or while en route to points across the Pacific.

San Francisco returned the admiration: since the late 1920s his plays have rarely been absent from local stages, and in fact the city may be second only to New York in terms of frequency of presenting his work. The first Coward play to be produced in the Bay Area was a 1927 production of The Vortex at the Fulton Theatre in Oakland, just two years after Coward first made his name with the play in New York. It starred Marjorie Rambeau, a San Franciscan who was by then an established star on Broadway and in silent films.

During Coward’s lifetime, the Curran Theatre, right next door to A.C.T., was the playwright’s favored San Francisco home for his work. Productions of some of his greatest New York hits often toured here with their original Broadway casts, including his operetta Bitter Sweet, starring Evelyn Laye in 1935, and the Clifton Webb–Peggy Wood–Mildred Natwick Blithe Spirit in 1944. The Curran would be the site of several Coward milestones: his very last performances with Gertrude Lawrence took place there in 1948 (when he filled in for an ailing Graham Payn in Tonight at 8:30), and some of Coward’s final stage appearances in North America graced the Curran in 1958, with his double-bill of Nude with Violin and Present Laughter.

Still Life, the basis for all subsequent incarnations of Brief Encounter, began its life as one of the series of nine one-act plays Coward wrote for himself and Gertrude Lawrence, performed under the collective title Tonight at 8:30. Still Life premiered in San Francisco in 1937 at the Curran in the first production of Tonight at 8:30 seen here—Noël and Gertie had just made their New York bow in it earlier that year. This incarnation of Tonight at 8:30 was produced by Estelle Winwood and her director husband, Robert Henderson. Winwood acted in most, but did not play all, of the leading women’s roles—Still Life starred Mary Astor as Laura and Bramwell Fletcher as Alec. Fletcher is the only other actor besides Noël and Gertie to play leading roles in all nine plays of the cycle. This production was also unique in that, once all nine plays had premiered here, the producers had audiences vote on their three favorites and presented those for a few additional performances. There is no record of whether Still Life was among those selected, but it was highly praised by critics and embraced by audiences. 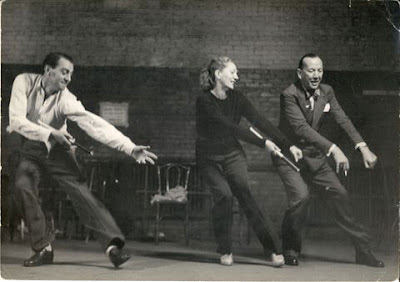 Graham Payn, Gertrude Lawrence, and Noël Coward rehearsing the revival of Tonight at 8:30,
which played the Curran Theatre on Geary Street in 1948
(photo by Vandamm Studio / courtesy of Timothy Morgan Owen)

The next major San Francisco incarnation of Tonight at 8:30 was the 1948 revival Coward directed, with Gertie again as star and Noël’s partner Graham Payn playing Coward’s former roles. They enacted six of the plays; Still Life was not one of them, probably in part because the film Brief Encounter had been such a huge recent hit. The A.C.T. production of Tonight at 8:30 in 1974 included three of the plays: Red Peppers, Family Album, and Shadow Play. So 72 years after it was first seen here, Still Life is finally returning to a Geary Street stage, right next door to where it began.