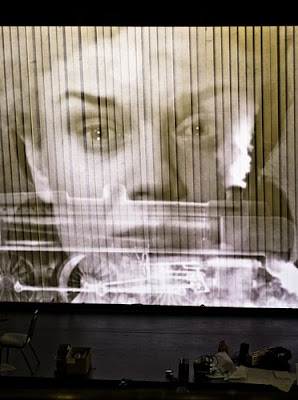 The dog-eared National Geographic on my bedroom floor offers evidence that Stonehenge, that ear-ringingly spectacular, eye-wateringly mysterious clump of rocks in Wiltshire, England, was built over the course of 500 years. The splendor of its prehistoric creation is matched only by its mystery, and words are insufficient for its majesty: Stonehenge was awesome back when “awesome” was a solemn, whispered word instead of today’s withered adjective, used for everything from sandwiches to skateboards.

On the other hand, the traveling Brief Encounter set, fresh from the production’s tour of the United Kingdom, needed only three days for its California construction—and it boasts two video projectors. National Geographic indicates that Stonehenge had zero video projectors. Eat your hearts out, Druids.

Pictures are pleasant and movies are marvelous, but given the option I’ll take a set over either. Everything happens somewhere—all actions have context—and seeing a set well used as a living, functional space through and with which performers can interact to give their actions meaning and spectacle engages me in ways that not even the greatest treasure of American cinema (Rocky) can match.

On July 18, after a final performance at Oxford, the folks of Cornwall’s Kneehigh Theatre stuffed the Brief Encounter set into a 40-foot-long box and shipped it from London Thamesport ’cross the ocean on a slow boat toward San Francisco. On August 24, it reached Oakland—the finest of U.S. ports—where it floated around customs for a week. After the boxed set passed inspection, shippers loaded it onto a semi truck and drove it around the Bay—because, of course, this was the weekend the Bay Bridge closed. I’d seen a few photos of the Brief Encounter set from the U.K. tour, and it looked sharp—when I was offered the chance to mosey around load-in for a few days and snap some photos of Brief Encounter’s American resurrection, I took it. I mean, a chance to see how a gorgeous set is put together? Exciting!

I don’t exactly have the most glamorous set construction experience: scattered across a half-dozen college dorm productions, my life in set building was a life in which we, the brave construction crew, flailed about like terrified infants bashing together hammers and poorly cut lumber until someone’s dad showed up with an electric screwdriver to hush our anguished yelping.

So, yeah, I was pretty excited to see how the pros do it.

I’m not entirely sure what I had anticipated I would see. Well, that’s not true: I know exactly what I had hoped I’d see. I imagined a dream team of linebackers and longshoremen; a troupe of mustachioed musclemen heave-ing and ho-ing from the theater’s control booth to the catwalk, single-handedly tossing around expensive set pieces as if they were made of balsa. In my imagination these bald-headed genies—A.C.T. subcontracts Mr. Clean, if you will—would piece together the set in minutes, rig the lights in an hour, and be out by the first smoke break.

That was awful dumb of me.

But then, Saturday morning—bam! The stage sprouted floorboards and multicolored scaffolds sprang from nowhere. Lights danced on the projection screens and reflected vibrant purples and pinks onto the house seats. The stage had become a set, alive with the hustle and bustle of its crew. The hammers pounded time, metering the cautious choreography of construction. I perched in the dress circle and watched the performance. 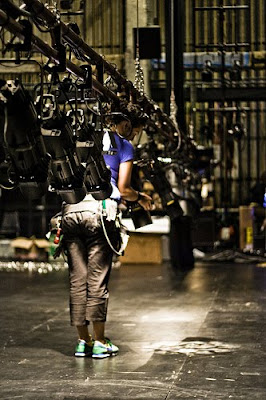 Lights go up at the American Conservatory Theater for the load-in of Brief Encounter. 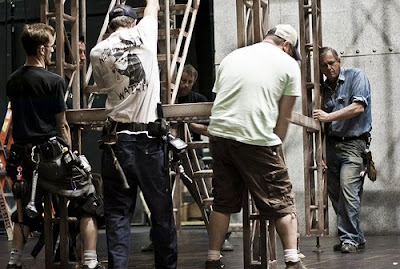 The crew secures the set pieces in place during the load-in of Brief Encounter. 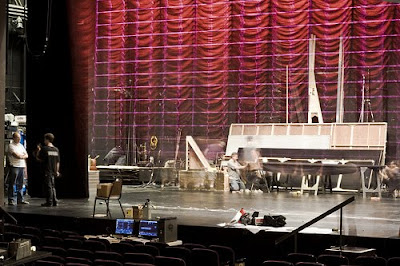