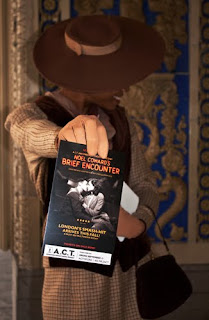 You are a lot more likely to attend an event that you know is happening, right?

In its most basic form, the job of A.C.T.’s marketing department is to make sure that the public knows that our shows are happening. We use all of the usual means of communication with our audience: ads, emails, radio and TV spots, stories in the press. In my very humble opinion, however, the BEST way to reach people is to do it with FLAIR!

What do I mean by flair? To get the word out with what A.C.T. does best: theatricality.

To open our 2009–10 season, A.C.T. is bringing Kneehigh Theatre’s production of Noël Coward’s Brief Encounter straight from the U.K. I am crazy excited about this show. It’s terribly romantic, wackily funny; it’s got great music and an innovative approach to fusing cinema and theater; and it’s got BRITS! Seriously, if it had been in rehearsal here instead of across the ocean, I would have been playing hooky every day from work to get into that rehearsal hall. The only problem: both Kneehigh Theatre and the show itself are relatively unknown in the U.S. It doesn’t have the same built-in audience that a big musical from New York has. So we have to work extra hard to make sure that everyone in San Francisco knows that this is the event of the fall.

Fueled by my passion for this show, I decided that we had to take the word out TO our audience. I gathered up some of our M.F.A. students and headed to the costume shop. Brief Encounter takes place in the 1940s, so we were fitted in period costumes (GORGEOUS period costumes), and I gave the students the rundown on the show. That night, we headed to the mecca of theater audiences—the crowd leaving August: Osage County. After the performance, and every performance following, we stood in front of our theater (the American Conservatory Theater, which is next door to the Curran, where August is playing) in costume and with British accents (one authentic), talking about Brief Encounter and handing out flyers. We have a lot of fun—which translates to the passersby that the show is going to be a lot of fun. Seriously, there is nothing like a smile, an accent, and a perfectly tailored suit.

Our costumed gang may also be making appearances at BART stations (like the train station in Brief). And we’re bringing cocktail napkins to local bars that say, “Meet me for a Brief Encounter” with the website (www.briefencounter-sf.org). AND we have fabulous buttons that we pass out around town.

We are not selling toothpaste, after all. We are selling a great experience. It’s my job to entertain you straight into the theater for a beautiful night. 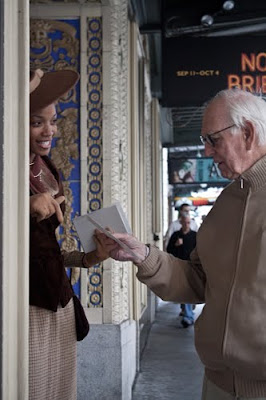 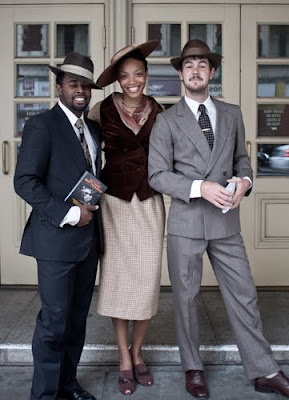