Every other summer, students from A.C.T.’s Young Conservatory go to England to develop a new play written for young actors as part of an ongoing exchange program with Theatre Royal Bath. This year, a group of Young Conservatory and M.F.A. Program students traveled to Bath to work on Riot, a brand-new play by Irish author Ursula Rani Sarma, which will receive its world premiere production at A.C.T. in April 2010. Anya Richkind, a junior at San Francisco’s Lick-Wilmerding High School, writes one last time after returning from her two-week transatlantic theatrical adventure.

After a tearful goodbye to Bath, we moved on to London. There was a lot of sniffling on the two-hour bus ride there. In just 12 days, we had all gotten incredibly close with the English kids. But, as they say, the show must go on, right?

We spent our first few hours in London wandering around Covent Garden. After a lovely dinner, we headed over to the West End to see a production of Priscilla, Queen of the Desert. However, by this point, it had started raining. No, a more accurate word is pouring. In the four or five blocks between the restaurant and the theater, we all got completely soaked. But it was worth it. Priscilla, about three drag queens crossing the Australian desert, was the most uproarious, crazy, hilarious thing I have ever seen. It even involved some audience participation, and I am proud to say that I made my England debut dancing that night (along with two other A.C.T.ers)!

We spent the next day seeing as much of London as we could in a day. After a wonderfully narrated tour of Buckingham Palace, Westminster Abbey, and Big Ben (to name a few), we ended up at the National Theatre for a technically and expressively flawless production of Phèdre. The acting in this super intense Greek tragedy was superb. We all sat there with our mouths gaping in awe.

And then, before we knew it, it was time to leave. Now, at home, England feels like years ago. I’ll never really be able to describe the whole experience in writing, but I can safely say it was the best two weeks of my life. More than anything else, the camaraderie that enveloped us all by the end of the trip was so powerful that I can still feel traces of it here. It’s amazing how nostalgic I can feel for an experience that was, in actuality, so short. I grew as both an actor and a person more than I ever could’ve expected. And so, as simple as this may be, I miss it so much. Well, I suppose all I can do is write a few more therapeutic blogs and bite the bullet. The show must go on. 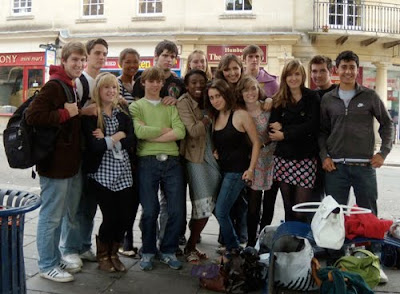