A Mad Dash to Stratford

Marilee Gardner, a member of the A.C.T. Board of Trustees, was part of the A.C.T. family that traveled to Ontario, Canada, last week to represent A.C.T. at the opening night of Phèdre at the Stratford Shakespeare Festival. Produced in association with A.C.T. and directed by our artistic director, Carey Perloff, Phèdre will open at the American Conservatory Theater in January featuring actors from the acclaimed Stratford company.

I spent a whirlwind three days in Canada. Friday I flew to Toronto and met with fellow board member Cherie Sorokin and A.C.T.’s exiting executive director, Heather Kitchen, and then we made a mad dash to Stratford, Ontario, for the festival. It is a very cute town (and, if one can stay out of the antique shops, it is an affordable town). Heather had made all the arrangements, which included our hotel and a biographical tour of Stratford based on Heather’s many years there with the festival. It is lovely: parks, a river, charm . . . and, of course, the theaters. On Saturday night, before the opening of Phèdre, we met Carey, the chairman of the Stratford Shakespeare Festival’s board of directors, and its artistic director for dinner. I believe that I was able to convince their chairman to come to San Francisco with the promise that he would be well entertained. I offered to have a dinner at my home, and if I remember correctly, Cherie was charm itself when she said, “Oh, you must eat at Marilee’s.” It should be obvious to one and all by now that I’ll do anything for A.C.T.

After dinner we attended the show, and I can only say that Phèdre is wonderful. Carey has done a fabulous job with a terrific translation and we can all be very proud of “our girl.” The show will do very well in San Francisco, because period pieces are well liked by our audiences, and this one is smart, passionate, beautifully acted, and exciting. The feeling in the room at the post-opening party said it all—excitement and pride, with “tired” thrown in for good measure. I met most of the actors who will be coming to San Francisco, as well as the very pregnant wife of one of the actors. She will have delivered the baby by the time they arrive in San Francisco, and I have promised to babysit. Again, I’ll do anything for A.C.T.

On Sunday, we returned to Toronto through the very beautiful Ontario countryside and registered at the hotel. We stayed at the “King Eddy,” as all of us who know Toronto so well call Le Méridien King Edward. Just to let you know, it wasn’t easy to register, and once we did, we were handed flashlights and told that the electricity would be off from midnight to 5 a.m. Apparently, when the hotel was wired for electricity 100 years ago, they made some sort of error and decided to wait until I arrived to fix it. We were too tired and had laughed far too much to care, so after a drink or six, we went to dinner at a great steak restaurant.

I would like to tell my fellow trustees that you missed a wonderful weekend. I wish that more of us had taken part. When I say that we laughed, I mean it. By the way, I have never written a “blog” before, but I promised Carey I would do this. I hope you liked it because it may never happen again. 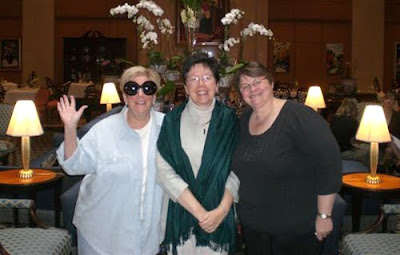