Artistic Director Carey Perloff writes to us again from the Stratford Shakespeare Festival in Ontario, where she is directing Jean Racine’s Phèdre, which will transfer to A.C.T. next January.

In our rehearsal process at A.C.T., the protective embrace of the rehearsal studio is fiercely maintained until the end of the fourth week, when we make the big leap to the theater and begin to think about giving the play to a much larger audience in a very public way. By then, we have presumably found our sea legs and made our humiliating mistakes and have found a shape to the production that we can all hold on to.

So it was wild and disconcerting, after two weeks of intensive work on Phèdre in the rehearsal studio, to suddenly be rehearsing onstage this weekend—knowing that we still had another month to go in the studio! The way it works here is that on Sunday nights when nothing is performing, these poor exhausted actors, who have already done four shows that weekend AND been in rehearsal, have a chance to work on the set of their next show, which is temporarily set up in the theater. I had to keep reminding myself that this was part of the PROCESS—that we didn’t have to be finished, we just had to use the space to discover the next step of the play . . . 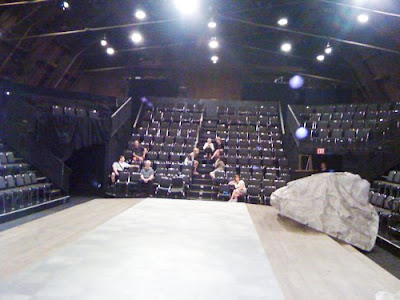 It’s actually a remarkable gift to have that opportunity, particularly for a play like Phèdre, which is all about bodies in space, for the actors to feel the vast gulfs between their characters and the enormity of longing and language that is needed to fill those gulfs. We had gotten to the scene in which Hippolytus says goodbye to Aricie, and she is distraught that he won’t confront his father about Phèdre’s proposition. It’s a big, passionate scene of misunderstanding between two people who love each other—he wants her to go into exile with him, but she knows she can’t go until he officially proposes to her, which he’s too wild to remember, or to understand—and suddenly, being on the actual set on the stage, the whole storytelling became clear. 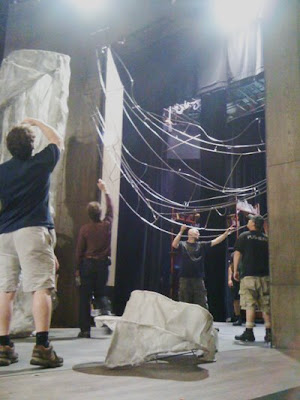 The stage we are performing Phèdre on is a 48-foot thrust surrounded by a sort of moat, with audience on three sides. I asked Johnnie [Jonathan Goad] (who plays Hippolytus) to stay in the moat, while Claire [Lautier] (Aricie) was on the deck . . . the spatial gulf between them was unbridgeable in a way we couldn’t have anticipated in the studio. She couldn’t go down there into that no-man’s-land with him, and he, an exile, could never come back onto the stage with her. When Aricie asked, “If we are not in any way bound, how can I honorably escape with you?” that word “bound” was like throwing out a rope that had to be held between them to allow the gulf to be bridged. They stopped having to “act” the scene, because the space told them everything. Incredibly helpful! Now we can go back into the studio with that knowledge intact.

Most of these actors have a long history of working together, and their level of emotional availability to each other is amazing and moving. They have played across from each other in every permutation of relationship, so they’re unafraid. They also have too many other shows in their minds to get bogged down. The experience of doing three shows at a time seems to wake them up rather than wear them down. It makes me long to do real rep again at A.C.T.—to slam one play up against another, to allow actors to hold within them multiple characters—it’s a great workout and a great way to keep the work alive.

Of course it also helps that Stratford is a town in which working theater actors can afford to own homes and live like real human beings. I think about how hard our actors struggle just to pay their rent and make ends meet, while here at Stratford, if you’re lucky enough to get a company contract, you can afford to have children and dogs and houses and cars like the rest of humanity, and live right in the middle of the community you are performing for. That is a gift. I’m not sure how to solve that in San Francisco, except to keep fighting to endow A.C.T.’s core company so that senior actors are paid what they are worth and their commitment to the company is rewarded. One perk we CAN institute at A.C.T., which I have loved watching at Stratford, is the idea of company classes. These actors warm up together before every show, they take voice, Alexander technique, speech, and movement classes, both together and individually, so they all continue training at the same time as they are working. There is an intimacy that comes from being in class together, from lying on a ball and breathing together and making ridiculous sounds and from moving together, that binds a group of artists in a profound way. Now that our conservatory has our amazing new core faculty in place, we have the chance to do this with our company—and we have to grab it!

Finally—I have been realizing how unusual it is that the actors in A.C.T.’s company have a real say in the work they do and in the governance of the institution as a whole. The actors in Phèdre seem amazed that our core company has a hand in choosing the repertoire, but it seems to me that the actors who are at the center of the work have an instinct about audiences and storytelling and the REACH of the work that is unique and should be central to the decision making of the institution as a whole.

I rode my bike through the bucolic fields of southern Ontario this morning, and after about five miles I came to a one-street town called HARMONY. Made me smile.
CareyPerloff GearyTheater Phèdre Racine