A.C.T.’s 2008–09 season is coming to a close this weekend (Don’t miss out on the final performances of Edward Albee’s At Home at the Zoo!), but there’s no rest for our fearless leader. Artistic Director Carey Perloff is up in Ontario directing Jean Racine’s Phèdre, which will transfer to San Francisco next January, with the stellar company of the world-famous Stratford Shakespeare Festival. Here are some of her thoughts from abroad. 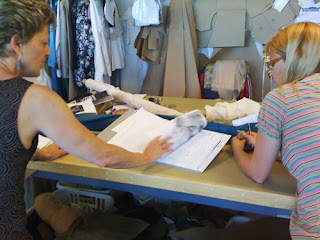 It’s Canada Day up here at the Stratford Festival, but that doesn’t mean a day off from French eroticism. We’re a week into rehearsals for Phèdre, heading deep into the heart of this amazing labyrinth of a play. My head is still reeling as I try to get accustomed to working at this enormous institution, which operates like its own kingdom with its own jargon and laws and sets of givens. The daily rehearsal schedule has military precision: there are eleven plays in repertory this season, some in performance already, some in rehearsal, all populated by the same company of actors, who rush from class to costume and wig fittings to performance to rehearsal with a stamina that exceeds anything I’ve ever seen.

There are days the rehearsal call says “P” which means “Priority” and on those days I get my entire company, if I want them, but only if I’ve claimed them two days in advance, or they get swallowed back up by the machine. On other days the call says “GS” or “Good Secondary” which means I get NEARLY all of my cast except for those in Julius Caesar (so I lose the divine Johnnie Goad, who is my Hippolytus, since he is also Mark Antony in Caesar). And then there are days like today which are labeled “S” for “Secondary”, and that means almost my entire company is off doing Three Sisters so I get to focus on the big scenes with Queen Phèdre and her confidante Oenone, played by the truly amazing Seana McKenna and Roberta Maxwell who are not in the Chekhov.

In order to squeeze out the hours, you almost always have to work out of order here, a pretty wild proposition with a play like Phèdre since it is structured like a series of dominoes falling: one explosion or discovery leads to the next and to the next with a kind of terrifying inexorability, so when you jump to a new scene without having staged the scene before, you have to constantly reconstruct the thread that got you there . . .

It’s definitely a new adventure. I got to see the entire set “fitted up” in the theater the day I arrived—which was a huge bonus. Christina Poddubiuk, the designer, has created an extraordinary structure out of wire mesh and vellum that looks like a cascading wave that comes over the portal and spills onto the floor like surf: it is reminiscent of the drapes of fabric in the background of baroque paintings, but is also the tidal wave of libido that erupts into Theseus’s palace, and the night we got there, the stage crew was busy inserting tiny strips of LED lights into the structure so that it glowed from within in a totally magical and mysterious way. There are three pieces to the mesh sculpture which we have labeled “the cascade”, “the surf”, and “the cloud”, and much of our challenge in tech rehearsals will be to see how the shapes relate to the actors and how to create an atmosphere that embraces the actors without dwarfing them. My lighting designer has been at nearly every rehearsal—another benefit of being in a small town where everyone lives three blocks away. So we’re all in this together.

The beauty and intensity of Phèdre is overwhelming. To keep myself sane I am taking voice class with Nancy Benjamin, who is about to come to A.C.T. as our new speech teacher. That’s a whole other adventure. After the first class I was dizzy for two days. She reassured me that it was only because I probably hadn’t breathed that deeply in ten years. Or EVER. By the third class I could feel my tight little voice relaxing into new places . . . I may be a whole different person by the time I get back to San Francisco.
CareyPerloff GearyTheater Phèdre Racine