- June 01, 2009
posted by Manoel Felciano, cast member of Edward Albee's At Home at the Zoo 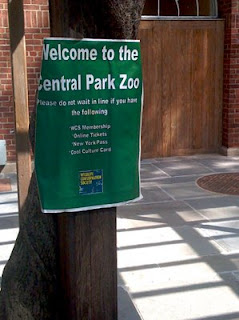 These are the famous first words of Edward Albee’s explosive debut play, The Zoo Story, written in 1958. With this statement Jerry introduces himself to Peter, and what follows is perhaps the most riveting first encounter ever written for the theater. The Zoo Story, originally a one-act, is now paired with a prequel act, Homelife, which Albee wrote in 2004. The two together form Edward Albee’s At Home at the Zoo, which opens at A.C.T. in June. I have the great privilege—and daunting task—of playing Jerry.

A few weeks ago, between leaving the cast of Ragtime at The Kennedy Center in Washington, D.C., and starting rehearsals for At Home at the Zoo in San Francisco, I found myself with an unexpectedly free afternoon back in Manhattan. My flight for San Francisco left at 6:55 p.m. It was 2 p.m. I set out from my apartment at 14th and 9th to retrace the pivotal journey Jerry makes just prior to the opening lines of The Zoo Story.

Why did Jerry do this? Why didn’t he just walk across the park from his room on the Upper West Side to the zoo? What was he avoiding? What was he looking for? What did he encounter on his ritualistic walk from the Village to the zoo? I decided to find out for myself.

I started at the bottom of Fifth Avenue, and briskly (New Yorker pace) tried following in Jerry’s footsteps. While the play was written in 1958, the text (except for a few minor updates) and its representation of the city remain unchanged, and Edward Albee insists that At Home at the Zoo takes place in the present. So no point in worrying about what Fifth Avenue was like 51 years ago. What might I find on a beautiful sunny spring afternoon in 2009, between 2 and 4 p.m., exactly when Jerry makes his pilgrimage, that might give me some insight into what makes him tick? I found plenty, and some of the discoveries and “coincidences” are nothing short of hair-raising. On a whim, I decided to document what I was experiencing with my iPhone’s little camera, and the resulting travelogue, with relevant captions, can be found here:

What began at the arch in Washington Square Park ended with a gentleman (a real-life Peter?) reading on a park bench near Fifth Avenue and 74th Street. Jerry’s journey had become mine. Block after block my eyes were slowly opened to what Jerry might have experienced, particularly at the Central Park Zoo, and why he would need to start a conversation with the unsuspecting Peter. What happened next? A journey of a different sort: a dangerous, thrilling, funny, “heart-shattering” collision between two very different men, that will leave both of them irrevocably changed, and far, far from where they started.
AtHomeAtTheZoo EdwardAlbee GearyTheater ManoelFelciano