- May 22, 2009
posted by Beatrice Basso, Dramaturg and A.C.T. Artistic Consultant

This week at A.C.T. we’re holding a workshop to continue developing The Tosca Project, a theater/dance fusion piece created by A.C.T. Artistic Director Carey Perloff and San Francisco Ballet choreographer Val Caniparoli. Featuring a remarkable cast of actors and dancers, The Tosca Project celebrates a century of San Francisco history in North Beach’s famed Tosca Café. Beatrice Basso, who serves as the production’s dramaturg, writes to us from the workshop room about the process of shaping—and reshaping—this unique original work. 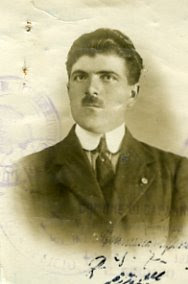 A large portion of our time was devoted to preparing a “sneak preview” for donors and others who have particularly helped us develop the project. Among them, three women carrying whole chunks of Tosca Café history were at the presentation: Jeannette Etheridge, who has been the owner and soul of the bar since the late 1970s (and shared many of her stories with us over time), and the two Francesconi sisters from Lucca—Martha and . . . Tosca(!)—now in their eighties.

In 1919, after their father, Gesualdo Francesconi (see picture, right), returned from World War I, he bought the Tosca Café. He named both the bar and his eldest daughter after Puccini’s opera, which had recently become an international sensation. In an interview we did with them a few weeks ago, Martha and Tosca told us that Prohibition was already in the air, and people in the neighborhood thought their father was “shell-shocked from the war” for opening a bar at that time. In fact, he wasn’t; he just loved opera and Italian coffee (spiked with rum when necessary!).

It wasn’t on the program for the evening, but as soon as Carey [Perloff] heard that the Francesconi sisters were present, she asked the performers if they were willing to share a rough version of the scene depicting the founding of the bar, in their honor. We had barely worked that section, but they were all game anyway (see picture).

Even though the material we’re creating in no way attempts historical or even topographical accuracy, there are elements in it that are wildly recognizable by the people who have been a part of this bar for decades.

To see the sisters watch intently and giggle and whisper to each other as our version of the Italian founders was taking place; to see Jeannette be moved to tears by “Vissi d’arte”—her mother’s favorite aria—was a show in and of itself. 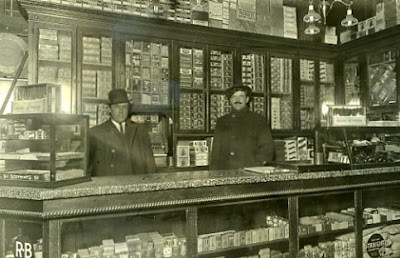 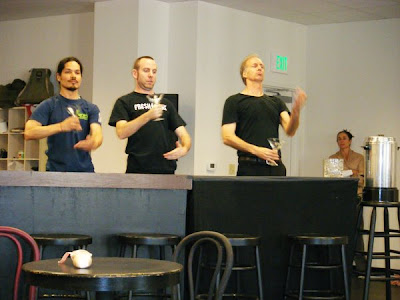