This week at A.C.T. we’re holding a workshop to continue developing The Tosca Project, a theater/dance fusion piece created by A.C.T. Artistic Director Carey Perloff and San Francisco Ballet choreographer Val Caniparoli. Featuring a remarkable cast of actors and dancers, The Tosca Project celebrates a century of San Francisco history in North Beach’s famed Tosca Café. Beatrice Basso, who serves as the production’s dramaturg, writes to us from the workshop room about the process of shaping—and reshaping—this unique original work.

Yesterday afternoon we worked on a duet between WPA artist Sargent Claude Johnson and a young woman who happens to enter the Tosca Café as he is painting a mural inside. We were talking and struggling, trying and re-trying.

In general, this is a process of experimentation that requires patience and the willingness to “fail again, fail better,” especially in those awkward stages when the ideas sit uncomfortably in the bodies of the performers, or an improvisation has no shape yet. And so we did. And then again. And again. (The first picture captures this phase.) But no matter what we tried, something just wasn’t working.

This is a process that also requires the willingness to let go of ideas when the trying and re-trying doesn’t feel productive. And that is exactly what happened. We decided to incorporate a new idea originating from Gregory [Wallace] (who interprets the role of the painter), and we watched as all of the variables magically changed in front of our eyes: instead of a duet, the scene became a quartet of women, conjured up by the painter (see picture number two). The women, at first stuck in a Depression-era line of hungry homeless outside the bar, are transformed into muses for his mural. This is just a sketch for now, and much of the physical relationship between the artist and his subjects still needs to be figured out. There is dynamism, though.

In this workshop, each day ideas spring up and fall away and are reborn in new forms. Will we keep this newfound moment and let it grow, or will some new variation develop? I’ll let you know. 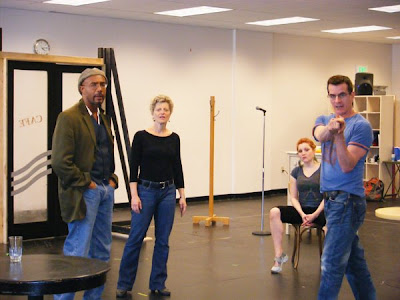 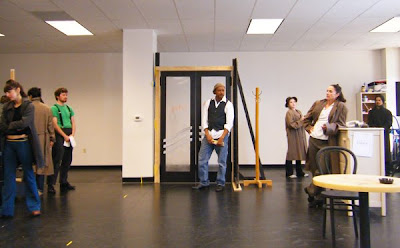