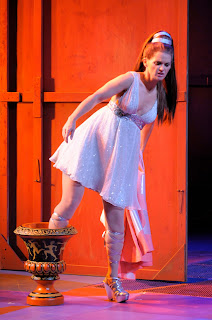 Every day after rehearsal is over and the actors have gone home, the stage manager for each production (or his/her harried intern) sits down and types up an email that summarizes, in minute detail, that day’s work. Typically containing general information about the production’s progress, as well as notes and updates for the design team, the rehearsal reports are divided into categories (costumes, lights, sound, props, etc.) and presented as a list of updates and/or requests for each department that are sent to designers, production staff, artistic staff, marketing staff, and (luckily for me) the publications intern.

I don’t make it into rehearsal very often; I will maybe see a run-through once or twice in the studio before a production moves into the theater for tech rehearsals. While I spend most of my time confined to a cubicle on the seventh floor of A.C.T.’s studios and offices at 30 Grant Avenue, typing away at my computer, the rehearsal report regularly appears in my inbox, my only glimpse into the performance as it evolves, and into the (occasionally) wacky and wild goings-on of the floor above me. Most of the time rehearsal reports contain random, unexplained notes and requests that, to anyone not intimately involved in the creation of the production, would be both puzzling and entertaining. I have compiled a list of the best of this season’s random notes/observations below. (By the way, the names of actual people have been changed to protect the perhaps not-so-innocent; character names are intact.) Enjoy!

1. Ms. Bowie was released at 3:20 and we worked on Ms. Allen’s alternate personalities for the remainder of rehearsal.

3. We are asking Tanya to be up on the clock for almost two pages, so is it possible to have a foothold for her?

1. The red blob has been spiked. Turns out Ms. Connor would like the blob to be horizontal instead of vertical.

2. The petals have a very unusual odor to them. Would it be possible to consider Febrezeing® them? Thank You!

3. Please add one bronzed dirty diaper for Mom to show Bing in Scene 6.

4. Please bring the Volcano vaporizer to rehearsal as soon as possible.

5. Do you foresee any problems with the ventriloquist dummy being thrown from one actor to another?

6. Yoyo: the bigger the better.

7. The baby cobra should be straight (not coiled).

8. Thank you for the machete options; however, the actors are concerned for safety and would prefer a machete that has less potential for danger, perhaps made out of wood or plastic that looks like metal?

9. Mr. Owens would like all the visible Jesuses to be naked with genitalia visible.

10. We ordered an inflatable gnome today!

11. We are discussing using food during rehearsal starting next week with banana chips (as tostones), cold cuts (tiger), brown rice and beans (as arroz con gandules), and sliced bread.

12. Specific mentions were made of the cat’s skull, femur, and vertebra as being a part of the bones Bill enters with on p. 63.

13. Michael found some heads at the Mime Troupe that he'd like to discuss having attached to the US [upstage side] of the set.

14. The unfired breakable plate managed to shatter into many pieces AND crumble to a big pile of dust when Mr. Williams hit it with his cane. We would like the plate to break into a few large chunks.

2. It may be necessary to shorten the Poseidon flippers.

3. Mr. Wilson will be one of the China silk manipulators. Does he need a cap or other head covering for this appearance?

5. Leanara enters at the end of scene II with her right foot stuck in the Etruscan pot seen earlier carried by The Stage Manager.

6. May we have a spray bottle with vodka water to spritz our rehearsal coats? Some of them are getting a bit rank.

1. Pylades ascends into heaven up the house left staircase on p.87. Can you give us something heavenly there? (Haha)
LesleyGibson