A Golden City of Awesomeness

One of the great things about working in A.C.T.’s prop shop (apart from the killer BBQs and vicious ping-pong smack-downs at the Florida Street shop) is the opportunity to create fabulously strange and wonderful props. You’d be amazed at some of the notes and requests that are generated through the rehearsal and design process. Oftentimes these props require extensive research and development, and sometimes multiple prototypes need to be built before the final product is successful. Granted, once all this work is done and the finished prop is onstage, chances are we will never build that prop ever again. It’s not a question of ability or desire—rather, it’s more a question of necessity. For instance, how many shows have you seen that call for a three-and-a-half-foot-long enema gun that shoots out disgusting green slime? (Answer: The Imaginary Invalid.) Or, how often do you need a large sheet of melted glass bottles that you can hang in a tree as “organic stained glass?” (Answer: The Quality of Life.) How about 20–30 fedora hats, all in descending sizes (some with bullet holes), beginning with a three-foot-diameter hat big enough for a giant, shrinking all the way down to a four-inch-diameter hat small enough for a cat? (Answer: Happy End.)

The props for War Music are no different, and as it stands now, one in particular leads the pack in the “extremely-fun-prop-to-build-but-when-the-heck-are-we-ever-going-to-use-it-again?” category. This would be the golden city of Troy. A prop like this is what we love best about the job, and you have to be quick on calling “dibs!” before someone else in the shop grabs the opportunity. The city of Troy is the type of prop, like all the good ones, that when you first look at the sketch or description, you have no idea how you’re going to pull it off, but you know it’ll be a blast figuring it out. 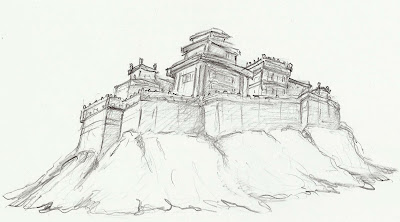 The description for this city was that it should look like the real deal would from afar, or look like what scholars today now think the city would have been like—defensively perched on a hillside, fortified by an ancient immense outer wall wrapping around the old city, as a newer refined wall shelters the recent construction of the ruling palace—and the whole city should be stepped so that the inner palace looks to be rising up to the gods. Oh, and it should look like it’s made of gold. Not all one shade of gold, but different shades so that you can see the history of Troy’s wealth, starting with the older gold on the outer wall, moving towards the shiny, newer gold encasing the ruling palace at the heart of the city. And it should be immensely detailed, down to brick and mortar lines and itsy-bitsy trees. 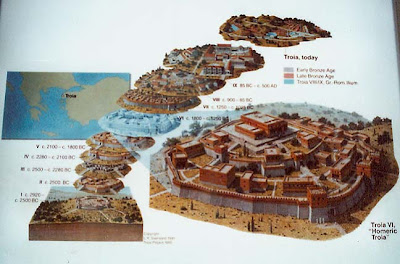 Sweet! This is going to be awesome!

In the end, we ended up using a healthy amount of polystyrene foam, mainly for the hilltop—that white bead foam that comes packed around your electronics. It’s amazing what you can do to a big block of it when armed with a carving knife, rasp, and ice pick. 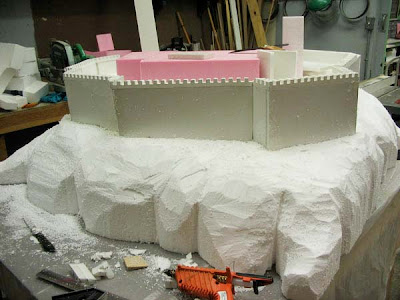 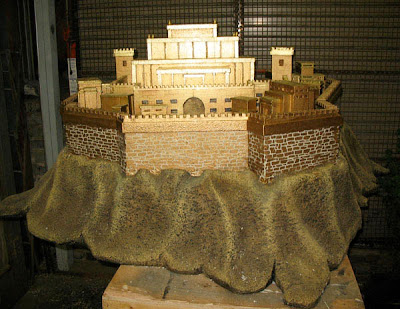 The walls and building themselves are comprised of foam board and pink insulation foam, and as far as the individual brick and stone details on the walls and buildings went, we were lucky enough to find stencils from a dollhouse company—these allowed us to create whole sheets of bricks at one time as opposed to driving ourselves insane making 500+ miniature bricks individually. We went with a rough stone block pattern for the outer wall and buildings, thinking that they would be the oldest pieces in Troy’s history, and saved the refined patterned brick layout for the inner wall and palace, as those would be the most recent of construction projects within the city. After the whole thing was plastered, painted, and shaded in tones of gold, we made the pinnacle of the city pop even more by covering it in gold leaf.

And ultimately, we did end up adding in some itsy-bitsy trees to the hillside. (Although the debate still rages within the prop shop as to whether the Greeks would have burned or used up all the trees surrounding Troy, especially if they’ve been waging war for ten years. I mean, firewood has to be hard to come by after ten years of scrounging, and they wouldn’t have burned their ships for firewood for cooking . . . but that’s somebody else’s blog.)

I am extremely proud of what my shop was able to accomplish for this production—Jeavon [Greenwood], Eric [Cripe], and Laura [Julio] should be commended for doing such a fine job on everything we created for War Music. And though we put countless hours and materials into creating this golden city of awesomeness—and yes, it’s safe to say that we will never do a show that calls for this prop again—I still think it was totally worth it. Bring on the next prop request.
GearyTheater LillianGroag RyanParham WarMusic