From the Theater Jazz Playbook 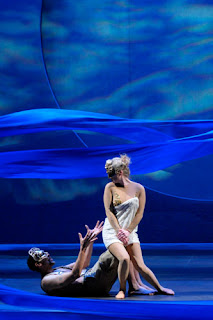 I’ll tell you right off that I will be mixing metaphors shamelessly.

It’s one thing to play college football, where your plays are fairly simple, but it’s another thing when you’re in the pros and you’re handed a biblically sized playbook written by the wizard of offense, Bill Walsh, only in this case the wizard is Christopher Logue. This isn’t a play in the traditional sense. It’s an epic poem that goes in and out of moments of huge spectacle and quiet moments of intimacy, without the through line and arc of a traditional play. It’s Coltrane’s A Love Supreme. The language is exquisite but it can be very daunting. Fortunately for me there’s a grizzled old veteran named Jack Willis that I can ask on the way to the line of scrimmage what the play is, what the formation is, and what the snap count is. Being in the presence of such high-caliber creativity has been influential in my own growth as an actor. Because it’s not a traditional play I’ve had to alter my approach to the music. Just play the scene and let go of trying to maintain an arc for a character. It’s like being on the bandstand with Miles. You either keep up or you climb down and go tend bar.

I did stand-up comedy for ten years and that was like playing three-chord rock music, because the bottom line was always laughter. No exceptions. Whenever I did make an exception (which was often) and did something that required the audience to listen and think I’d have to hear club owners having a nut-up as they handed me my money, ranting about “This is a comedy club! What the hell was that? Be funny! I can’t sell drinks when you talk about serious stuff!” It was like an arena filled with people expecting to see Guns N’ Roses but Miles walks out and starts playing. Coltrane once did a 67-minute version of “My Favorite Things” and the melody was recognizable every now and then.

That’s what I love about War Music. It’s straight-up jazz and folks who come and see it should be prepared to listen and think. Not everything is going to be spelled out for you. The melody won’t always be recognizable, but it’s there, you’ll hear it.
DavidA.Moss GearyTheater LillianGroag WarMusic