The text of War Music, the adaptation of Homer’s Iliad that is currently in rehearsal at A.C.T., is like a minefield, except that instead of deadly explosions of shrapnel that blow your legs off, you get awesome explosions of poetry that blow your mind. You don’t need to trip these pyrotechnics to love the writing in War Music, or to love the story, because author Christopher Logue is just that good, but when you find one, it’s like a little bonus. A sudden jalapeño in your Homeric burrito. You can stroll blissfully through a sentence, and then suddenly stumble upon a completely innocent-looking word like “slag,” or a simple phrase about a “mammoth hog,” only to discover when you look it up that it does not mean what you think it means, it means about a hundred different things. All of which make sense in the context, and all of which add weight, and add color, and add density, and add resonance, and add energy, and add poetry, and, well, just totally blow your mind.

Working on the dramaturgy for this piece, part of my job was to wander through the script with my eyes closed and my hands out, looking for any words that felt dangerous or smelled explosive, then write up anything interesting or relevant that I found about them, and deliver it to the artistic team.
It turns out that “slag” doesn’t just mean woman of questionable reputation, or perhaps of certainly disreputable reputation. Turns out, “slag” is also a metalworking term. It refers to the liquid impurities that float on top of molten metal, and are discarded in the creation of a piece, in the making of a sword or of a cup or of a crown. Sometimes, slag is used as a fertilizer. So, when the Trojan Anchises says of the Greek Army that “they are a swarm of lawless malcontents, hatched from the slag we cast five centuries ago,” he’s saying several things at once. He’s dissing their momma and their genealogy with one hand, while giving a shout-out to the technology of the Bronze Age with his other. He’s saying the Greeks ain’t nothing but runoff from the creation of Troy (which is sometimes known as the Golden City). Anchises is saying the Greeks grew out of the Trojans’ fertilizer, basically out of their crap, while Logue is simultaneously conjuring up a weirdly sort of sci-fi, Terminator-rising-from-the-silvery-puddle image of these warriors springing up from molten metal. “Slag.” That’s a word. That’s a word with power. In War Music, a lot of ’em are like that. 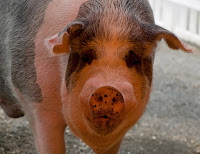 Then, there’s the giant pig. In the text, the “mammoth hog” is almost a throwaway line. In the middle of a debate about which Greek warriors will fight side by side on the front lines, an uppity young soldier clamoring for status yells at his assembled colleagues and his commander, “My lord, my uncle, Meleager, slew the mammoth hog that devastated Calydon!” Blink and you’ll miss it. Look it up, and you’ll find out that the mammoth hog story is this wild myth, a cautionary tale about what happens when you anger the gods (like in the Iliad), then get a crowd of Greek warriors to come in and try to clean up your mess (like in the Iliad), and have people fighting alongside each other who don’t really want to fight alongside each other . . . just like in the Iliad. It also turns out that Meleager and his saucy nephew might actually have had more to be ashamed than proud of in this saga of woe, wherein the “heroic” Meleager angered the immortal fates, killed his uncles, and got slaughtered by his own mom. So, maybe Homer was slyly poking fun at this uppity young soldier’s braggadocio. Maybe Christopher Logue is. Maybe not. After all, Meleager did kill the giant ravenous pig sent by Artemis to decimate the countryside where the king had forgotten her instead of honoring her as an Almighty, so maybe this tarnished uncle is a hero after all. “Mammoth hog.” One little phrase, just hanging out in the middle of War Music, waiting for someone to notice it, to ask, to poke, to prod, to walk across it and set it off.

After I served up my findings to the actors on a platter made of xeroxed pages, I ran off to start working on our next show, José Rivera’s Boleros for the Disenchanted. As the War Music cast and their staggeringly impressive director Lillian Groag run around in the rehearsal studio upstairs, I can’t wait to see what happens to the words. You never know what the artists will decide they need slag or hog to mean in the context of their scene, and you never know what the audience will hear when the words fly out into the Geary air like so many barbed arrows. Come see War Music, and keep an ear out for the slag . . . and for the mammoth hog.
ACTFellows GearyTheater MeganCohen WarMusic