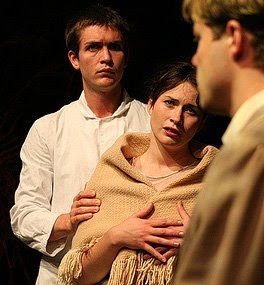 How much should an actor leave for the audience to imagine?

The other night I was chatting with an A.C.T. M.F.A. Program alum about the importance of imagination, specifically the audience’s imagination. I was telling him about a technical bit of stage blocking a few people in my class had learned. We discovered how, even though we were doing the same physical movements, the meaning of those movements changed completely when we combined them with the story of a simple situation. This sparked an intriguing conversation about how we, as actors, are supposed to allow the audience to fill in the gaps. We talked about the idea of doing less as actors, and allowing the audiences’ imaginations to do more. They’re not stupid. If I tell them, “This guy has to pee,” and he starts running towards a bush and abruptly stops, but smiles, they know what just happened without having it spelled out for them.

We student actors hear that dreaded statement—“do more by doing less”—often. Let’s face it, as a young actor who grew up “doing” things to improve, and who is now forking out quite a bit of time and money for an advanced education in acting, it strikes a discord to hear that the answer is actually to do less. When I’m in the midst of taking multiple technical classes—speech, movement, commedia prep, voice, text analysis—and I’m told that, after all the technical work is done, I have to trust its effect on me, let it go, and do less, I have to wonder why I did all that work in the first place. There lies the rub. The technical work may be hard, tedious, and taxing, but ultimately it forms the base of your character and is just downright necessary.

So how do I do less when I feel like I have more to do than ever?

I turned to Domenique Lozano, the brilliant assistant director of my class’s production of Macbeth, with this question 45 minutes before going onstage in front of an audience of high school students. I wanted to see if by “doing less” I would achieve more. Her response was simple, yet mind-blowing: “Do what is needed to tell the story, nothing more, nothing less. Let the audience fill in the gaps.” I was determined to try. My goal for that performance: to commit to communicating each word that came out of my mouth—nothing more, nothing less.

Was it brilliant work? Who knows? Did the kids in the audience pay attention? Yes . . . well, at least the first five rows did (the lights were too bright to see any farther). But a student did tell me in our postshow discussion that he was able to “relate to Shakespeare and didn’t realize how exciting it was.” That made the whole process worthwhile to me. Did I do too much? Too little? That didn’t seem to matter so much any more, because maybe, just MAYBE, we sparked a marble of interest into a world of classics and imagination that will inspire others.
ACTMFAProgram NickChildress