Playing Teaches Us the Game 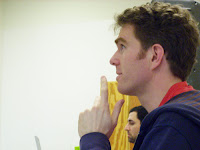 When Beth Wilmurt and I were in Germany a couple of years ago, she had an idea for a show about the question as to what extent an individual’s survival and identity are dependent on one another and other people.

The show would explore this question through a kind of abstracted vaudeville world. There would be a washed-up solo Headliner endlessly repeating his long-since-perfected act, and a Duo struggling to create their perfect act. We played with the idea for a couple of weeks at Mime Centrum Berlin, where we were in residence. Now we’re exploring it further here at A.C.T. in a two-week workshop with M.F.A. Program students, A.C.T. Associate Artist Jud Williford, and sound designer Jake Rodriguez.

The goal of the two weeks was to solidify the question, anchor, and structure of the piece. Precisely what about identity and survival is the piece asking? Are the Headliner and the Duo indeed the right anchor for the piece, or should there be more characters? How much should we hew to and diverge from traditional vaudeville structures?

To get answers, in our first week we generated a heap of material with the students, and in our second week, Beth, Jud, Jake, and I worked together to pull from that heap an assemblage of what the show might look like. Whether any of the material we create in the two weeks eventually makes it into the final piece is another matter. The main thing is to clarify what exactly the piece is trying to do, and how.

The work with the students was very exciting and brought up new questions. The tower of possibilities kept growing. Although it felt a bit overwhelming at times, things also became gradually clearer. Now we have a much stronger sense of what is and what isn’t “vaudeville” in terms of structure, subject matter, and performance style. This has given us a better sense of our desired aesthetic, in which we want to smear vaudeville, blur the line between off stage and on, blend past and contemporary aesthetics, and confuse conscious and subconscious events.

In terms of the piece’s form, we’re looking for an expression rather than an illustration. Instead of any linear, literal sense of narrative realism, we’re looking for something that follows the logic of one’s inner life, emotions, and dreams. Dreams have dramatic arcs without relying on consciously conceived notions of plot, dramatic structure, unity of time and place, etcetera. The seemingly chaotic logic of the subconscious arranges recognizable images, sounds, and dramaturgical structures in ways that make them unrecognizable, even jarring. Dreams leave mysterious gaps, and when we wake up we’re fascinated by these gaps and struggle to understand them.

This is what we want to create for our audience, something that compels them to engage in a struggle to understand not only what the piece is but how it’s played out. The form is the content, and the content is the form.

Toward this end, the material the students generated was wildly eclectic. A musical comedy blurred into a suicidal tragedy, and we felt afraid of this dark turn. A duo’s discombobulated, rambling fragments of an argument devolved into a bittersweet love song that brought tears to our eyes. We watched with a mix of disgust and delight as an unnerving masked figure had a questionable sexual encounter with a teddy bear and gave birth to a tennis ball, which a lost magician, tangled in a rope, then struggled to juggle and in doing so managed to free, and find, himself. 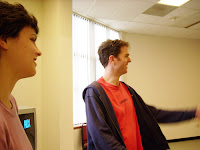 Wha-?! We don’t understand it either. But there are times when we can point to what’s happening onstage and say, “There! That’s it!” We’ll worry about understanding it later. For now it’s enough to feel that sudden spark of excitement when our guts recognize a truthful, human moment—despite the failure of our intellects to make logic of it. Logic is for sissies anyway. In the long run, it’s mystery that makes us stronger.

In a way, our process is to play our game first and learn its rules second. The playing teaches us the game. By starting with only a fragment of an idea, we’re doing together what playwrights usually do alone. Working alone, playwrights become alcoholics. Working together, we become lost, found, stuck, free, and more of who we are. It’s a slow, mysterious, at times uncomfortable process, and in the end the most rewarding because the work is inevitably more organic, specific, surprising, and exhilarating.

What exactly this work will eventually be remains to be discovered. So, back to Studio 8G we go.
ACTMFAProgram MarkJackson