The Fun in Dysfunctional 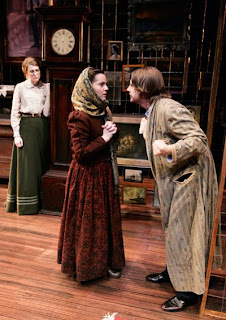 As I am writing this, I am finalizing a mix tape for Jack Willis. Who knew we had eerily similar music tastes? Yesterday, Sharon Lockwood brought all the girls in the cast homemade scones individually wrapped in foil accompanied by lemon curd and butter. And Bob Ernst can usually be caught practicing tai chi in costume and always has a good story or joke for the dressing room.

Philistines is a play full of philosophies, failures, hopes, loneliness, rebellion, suicide attempts, and samovars. Every moment in the play is activated by some sort of argument—most often familial and tense—leading toward someone or something’s destruction. But throughout the rehearsal process and currently backstage during Philistines we’ve learned how to put the fun in dysfunctional.

A cast mate has analogized changing in our dressing room at Zeum to having seven people change in a phone booth simultaneously. But the lack of a proper green room, or for that matter an actual full wall between the men and women’s dressing rooms, has actually made us cozier, closer, more open. The ladies throw extra snacks across to the gentlemen. We hear all the boys’ jokes and umm, well . . . other breaths of wind . . . and the men certainly are keen to the ladies' crushes as we gush over trashy magazines while we put our hair in curlers. We make the best of the tight space. Sharing musical interests, scones, and stories. And I think it would be nearly impossible to perform these often heartbreaking and immensely vulnerable scenes onstage without such a generous and close knit ensemble backstage. A family, if you will.

I always thought I knew what the word ensemble in relation to theater meant, but then I came to graduate school and really learned how it works. Philistines marks the last show of the M.F.A. Program for more than half my classmates and me after more than three years together, 12 hours a day 6 days a week, over 12 rehearsal processes and productions. After spending that much time together working mostly as one group, we know each other’s acting habits, secrets, and personal quirks, and how each takes his/her coffee. We argue and joke just like a family and always have a fiercely fun time onstage together.

And I feel the class of 2009 has added some new family members while working on Philistines with the A.C.T. core acting company and colleagues. I’ve sat in the audience of the American Conservatory (Geary) Theater and admired these well-seasoned and talented actors for the past three years, and now I get to “play ball” (to quote Jack Willis) with them every night. There might be a generational battle of philosophies and beliefs onstage, but there couldn’t be more of a blurred line between the M.F.A. actors and A.C.T. company members backstage. Of course Jack, Sharon, and Bob have all shared acting advice with us, but they have also shared personal advice, as well—ranging from keeping a family together while being a working actor to which organic honey is best and where to find it in town.

The family in Philistines may be at each other’s dogmatic throats over the course of the four-act play, but this cast feels more like home to me, onstage and off. 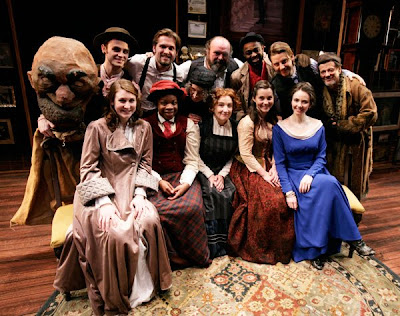