I Still Want to Be Rich and Famous 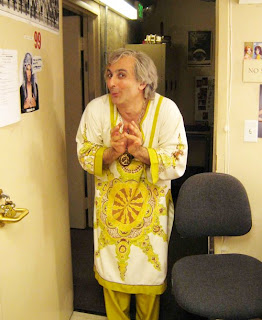 As I grew older I thought my dreams would become more practical or at least loftier. And I suppose I do indeed dream of world peace and paying off my student loans, but I still can’t shake off that “Rich and Famous” thing. At the end of the day it’s not really why I became an actor (I mean who wouldn’t love a profession where one can wear four wigs in under two hours), but I don’t believe any actor who says he or she wouldn’t love to walk the red carpet, particularly for a film that millions upon millions of people celebrated. That said, I’d even be excited to be invited to the afterparty or make loads of money for a commercial that nobody remembers. I guess I have gotten practical or just more desperate.

Well, HELLO!!! My name is Steve DeRosa and I’m guest blogging here today. Can I take a second and say that this theater is MAGNIFICENT?! And not just the exquisite building itself, but everyone backstage, administration, everyone is top-flight A++. What a privilege to work here. And I know my fellow castmates from out of town feel the same way. But after all, this is San Francisco. Judy Garland sings a song about it!

I had never been to your city. I can’t believe it ’cause I’ve been around. And around. I’m a New Yorker heart and soul, born and bred, and this is the first city where I’ve really felt the same energy on the streets as I do in NY. (Not to mention it’s the first city in the U.S. I’ve found MORE expensive, but I won’t go there . . . whoops I just did.) Still, the richness of culture. Well, ok, enough. This is a great, great city.

Oh, did I mention I’m in the cast of Rich and Famous? I play several characters: Fokine from the Red Shoes, who gives Bing Ringling (The BRILLIANT BEYOND BELIEF Brooks Ashmanskas) his rich and famous cufflinks, and The Stage Manager, who we call “Spruce” (not Bruce but Spruce), a proud if ineffectual gay man who has decided that in spite of his black eyebrows he will wear a blond wig.

Then there’s Anatol Torah, who has to have his own paragraph because he would insist on it. He’s a character based on a few wild artistic geniuses in Guare’s life, particularly one composer.

Bing’s Dad. Oh Dad, poor Dad . . . As my therapist once told me, “We all have parents.” Then she recommended all kinds of medication. Wait, Can I talk about the GENIUS Mary Birdsong?!!!—who plays Mom, along with a host of other fabulous characters in the show. (The fourth member of our cast is the SUBLIME Gregory Wallace, who you know so well. Alas, I don’t get to play much with Gregory onstage, but I can’t think of anyone to better complete our foursome.)

Finally, I play Tybalt Dunleavy, Bing’s oldest and dearest friend, who is now a giant Movie Star. For the set they actually made a billboard of my face, which at first was thrilling, then all I could think about was if my nose looked too weird or why they chose to make my lips look that way. Hmmm, perhaps the famous thing does heighten one’s neuroses . . . Tybalt is way up high, so his view of the world is not the same as everyone else’s, nor is it very secure up there. Ok, ’nuff said. I don’t want to give it all away. ROSEBUD IS A SLED. There, I said it.

I will say that going in and out of Tybalt requires two incredibly fast costume/wig changes, where four people help me transform in under a minute. In fact I call them “Team Tybalt.” They are superheroes to me, but I don’t know if there is a market for a comic book about a fabulous wardrobe and hair department. Then again this is San Francisco . . . 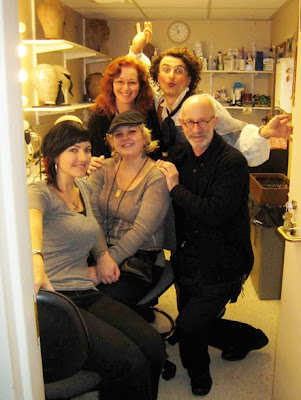 So yeah, I hope you enjoyed the show if you saw it. It’s a wild ride for us and I hope it is for you. After months now with this rich, remarkable play, I still can’t quite wrap up what it means and says in a tidy sentence or two, and maybe that’s a great thing. If you’ll forgive me for sounding “high-falutin’” as many of my relatives would say, I will quote a lecture of Robert Frost I ran across in a magazine (and don’t get me wrong I was just reading this because someone had taken my Enterainment Weekly):

If you’ve read this far you REALLY must be bored or crazy or both. And I thank you.
GearyTheater JohnGuare RichAndFamous StephenDeRosa