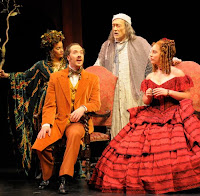 Monday, the day off from the show, the theater is dark and we don’t have class. Phew. It’s a day to recover from a nine-show opening week that ended with four shows in two days. It’s also our last day off until Christmas Day. We’re about to embark on a nine-day, thirteen-show stretch that has us all secretly wondering if our bodies can hold up. It’s hard to embody the Christmas spirit so many times in so few days! Also, I don’t think any of us M.F.A. students has ever had such a concentrated stretch of shows. For the first two years in the M.F.A. Program, our projects usually got about four final performances. In our third-year Zeum shows we get about five shows a week for three weeks. So moving up to eight or nine shows a week with A Christmas Carol is quite an adjustment, and we’re all learning what it takes to keep our performances consistent and alive.

Thankfully, it is a Christmas show and it’s hard not to get at least a little excited that you’re part of a timeless Christmas classic. Just thinking about the top hats, hoop dresses, fingerless gloves, and funky facial hair puts a smile on my face. The dressing room antics are also a blast and help keep things fresh. Because there are so many people in the show, all the M.F.A. guys share a dressing room on the fourth floor of the theater. Having spent two years changing for class together over at 30 Grant, we’ve developed a great rapport with each other when it comes to dressing room hijinks. The most recent incarnation of this is “The Great Change-Off.”

For the first few previews, after the show, one of our fellow M.F.A.s was consistently changing out of costume and walking out the door well before any of the rest of us was ready. We were bewildered at how quickly he changed. Then suddenly one day another M.F.A. guy hustled through his change and was out the door first. The competition was on. Now we’ve put up a calendar and are initialing who wins after each performance. After last Sunday’s matinee I saw that all the guys were taking the elevator up to the fourth floor—it’s a freight elevator so it’s a bit slow. I charged up the steps, got off on the third floor, pressed the elevator button on that floor, and ran up to the dressing room on four. So, while the gents were accidentally getting off on the third floor, I had already started changing on the fourth. Sadly, I still managed not to win because I lost valuable minutes scrubbing the make-up off my face.

I’ve come to learn that it’s as much what happens offstage as onstage that makes me want to be involved in the theater. A Christmas Carol is no exception. Onstage I love playing across from Jim Carpenter’s amazing Scrooge. As Fred, his cheerful nephew, every night I try to convince Scrooge to come to my holiday party. And every night I meet Scrooge in the street on Christmas Day, and we finally get to be a family together. Offstage the entire A.C.T. family comes together—M.F.A., YC, core acting company—it really is the whole organization in one show. And that’s a great thing to be a part of for the holidays. God bless us, everyone! 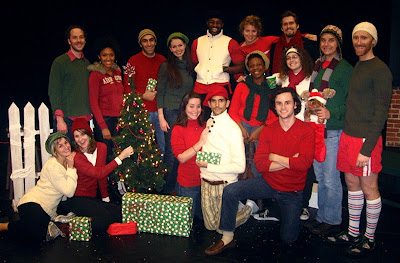