I have always seen a lot of myself in the title characters of comic strip classic Calvin & Hobbes, but I admit it’s been a long time since I had Calvin’s allergy to school. Trapped by cartoon magic perpetually in first grade, Calvin would agonize over every last second before the bell’s ring released him from his Sisyphean misery. Not me. I am much more Susie Derkins, Calvin’s nerdy nemesis: always cut short mid-thought by the same bell, reading during recess, arriving early, and staying late. It’s an illness.

It is because I am sick that I find myself, as I write this from Morning Due Café on Church Street, a little shell-shocked to be at the end of my first semester as an M.F.A. student at A.C.T.

What am I supposed to do for three weeks? I am having separation anxiety.

I am sure this would not have happened if our immersion in this training were not so complete. If the atmosphere in the building were not so warm and cozy. If my class was not so tightly knit. If the faculty were meaner and more cruel. But, no.

Case in point: we had our first evaluation meetings on Tuesday. Evaluation at A.C.T. is a different animal than it is in most graduate fields, I expect. It’s a question I get a lot from family and friends when I talk to them about the work we do: So . . . what do you get graded on? How can you even grade art/creativity/expression anyway?

The feedback we get is actually more important than the grades, and it happens like this: You are invited for a 20-minute meeting in a room alone with all of the teachers who have been working with you over the course of the semester—in acting, voice, Alexander technique, movement, speech, our research and play analysis courses, and whatever else—and given the opportunity to listen to them summarize the progress they’ve seen you make, the walls they see you hitting, and the growth they want to see from you. They take turns.

It’s the kind of scenario that sounds like a nightmare, but while I understand from second- and third-years that we will probably always walk into the room with some anxiety, the atmosphere could not have been less hostile. When I took my seat and took stock of the air in the room, I couldn’t help joking, “This doesn’t feel like a firing squad . . .”

It was, I admit, an emotional experience. (I am sure it always will be.) But it was emotional because, rather than confronting a room full of razor blades, as I’ve had other schools’ evaluations described to me, it was like this:

You walk in, you sit down, and you listen to a group of people you really had no idea were paying such close attention to you (because after all there are 11 other people in your class) describe exactly how deeply and clearly they see you—which is way more deeply and clearly than you can see yourself. The discovery that you really had no idea at all how well they have considered you as an artist and how well they know you as a person is a stunning one, since your previous idea of how well they know you, based on 12 weeks of being amazed by their acuity, was already pretty impressive.

This is what transparency feels like, wrapped in a blanket of care and support. And then you’re . . . what? Done? There ought to be some kind of program to help manage the withdrawal from this kind of environment.

To cope, I have already read and reread Life under Water and Almost, Maine, the two one-act plays we’ll be working on in January. I’ve attended rehearsal for Rich and Famous. I have seen the workshop presentation of Factory Girls, a new musical by two graduate musical theater writers from NYU and a joint venture between the young conservatory and the M.F.A. Program. I went to the A.C.T. holiday party. Today I will stop by the conservatory library to check out some plays to read over Christmas. I will see A Christmas Carol again. And again, probably. And then visit more rehearsals, and then . . . we’ll be back. Sooner rather than later, I hope. 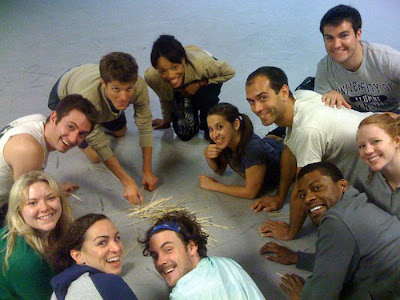