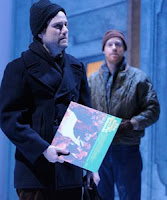 After finishing their run in San Francisco, the company of Rock ’n’ Roll, a coproduction of A.C.T. and the Huntington Theatre Company, took to Boston, where they are performing at the Huntington through December 13. A.C.T.’s Jud Williford, who primarily plays Ferdinand, took over the role of Jan for Manoel Felciano for two nights in November to enable Mano to make a quick trip back to the Bay Area. Jud sends an update from the road.

It has been a wild and crazy first week of performances. The crew here at the Huntington Theatre has been tremendous. Warm and hospitable. I’m finally through the performances where I had to go on as Jan (Mano) and am thrilled that I can now enjoy this city!

The audience here is different from the one in SF. Sometimes I feel that they watch me and Mano as if they were watching the “debating cavemen” on The History Channel. But overall they have responded enthusiastically to the show . . .

We all live on the same street and in houses/apartments right next to one another (Sesame Street) . . . like a neighborhood full of artists, or as Jack would refer to us, “craftsmen.”

Right now it feels like all we are doing is going from the theater to our homes. It’s a little repetitive but I figure I pretty much do the same thing when I’m in San Francisco so it’s not so bad.

The most exciting thing I’ve done, however, is the Freedom Trail! My mother was in town this past weekend to see me perform Ferdinand and Jan, which was really fun for me AND her! (Although, I’m convinced that she uses me as an excuse to go to cities she’s never been to!) Anyway, we went on this amazing journey through old Boston to see all the sites: Paul Revere’s house, Old North Church, the U.S.S. Constitution, site of the Boston massacre, etc. . . . It was very cool. We ended our tour with an early dinner at the Cheers bar. My mother insisted on sitting on Norm’s stool and getting a picture . . .

So far, that is all I’ve done. Everyone here is doing great and having a wonderful time exploring and getting to know the city.

I will have much more to come! On my way to New York this weekend on the Greyhound, which is sure to provide many great gifts of weirdos to talk about!!!
GearyTheater JudWilliford Rock'n'Roll TomStoppard